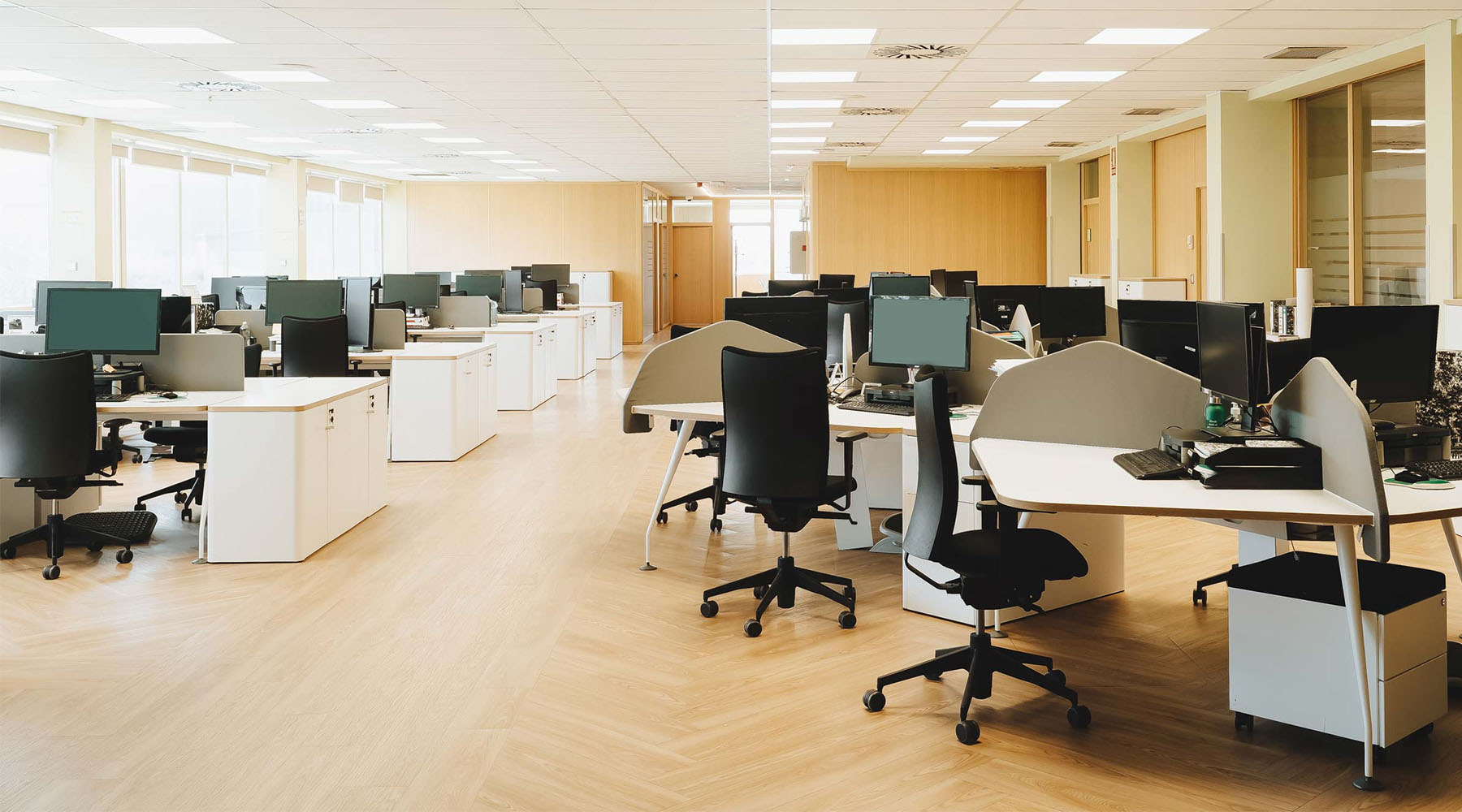 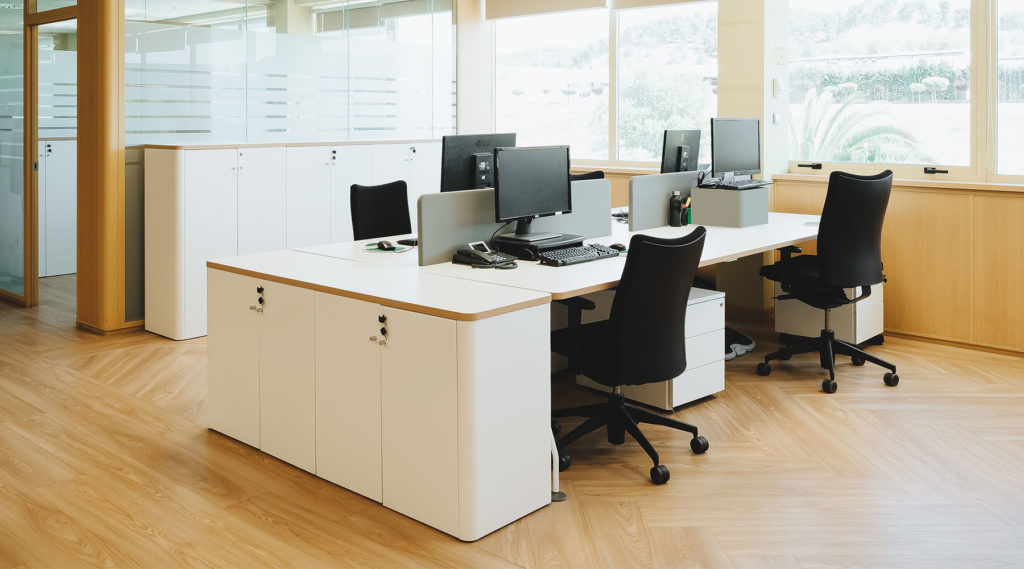 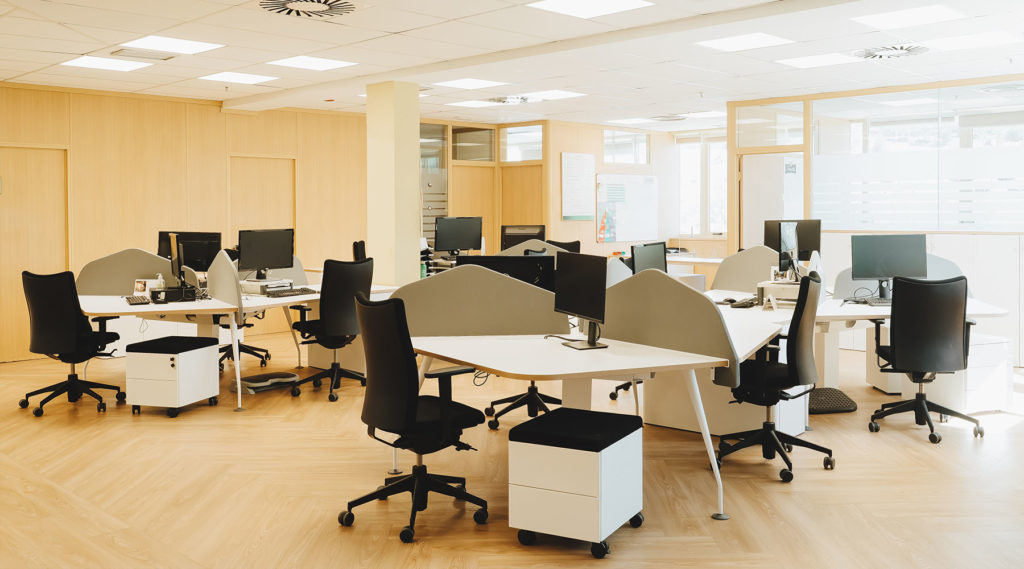 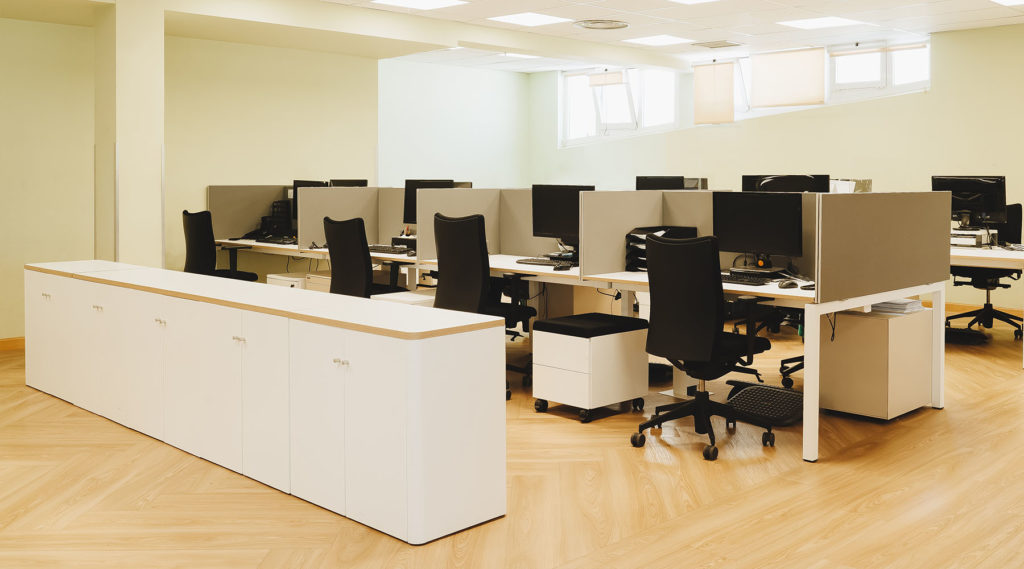 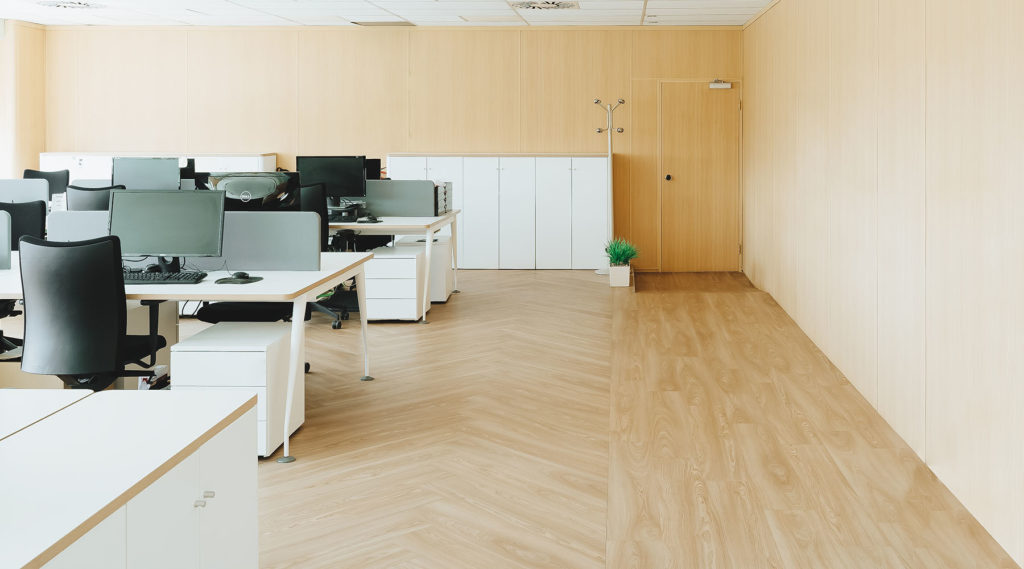 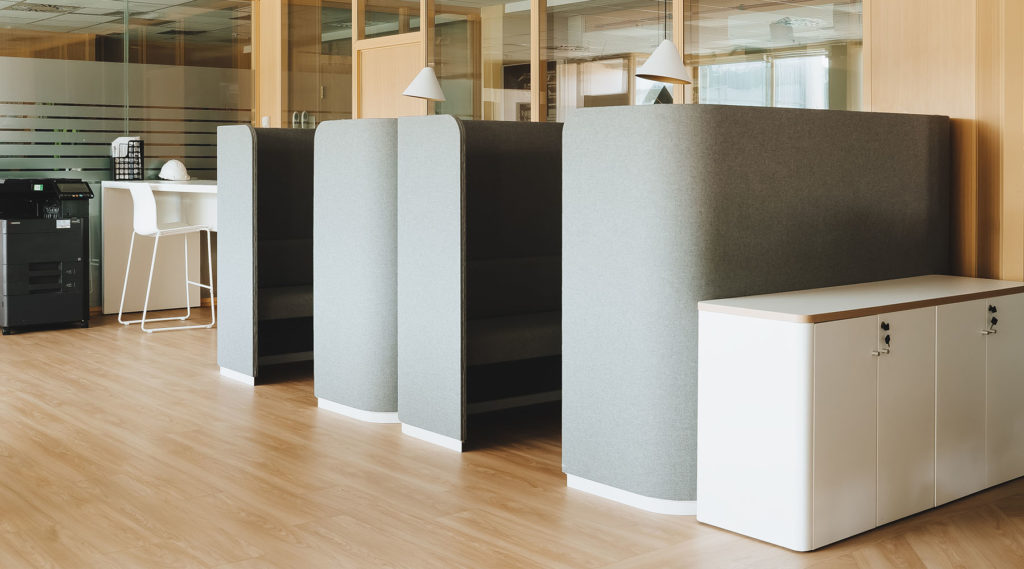 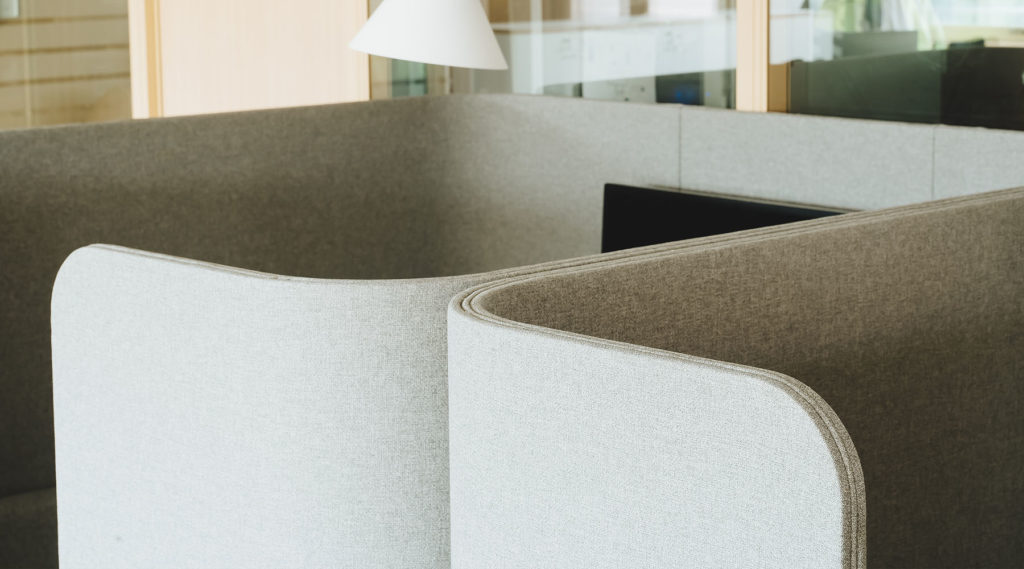 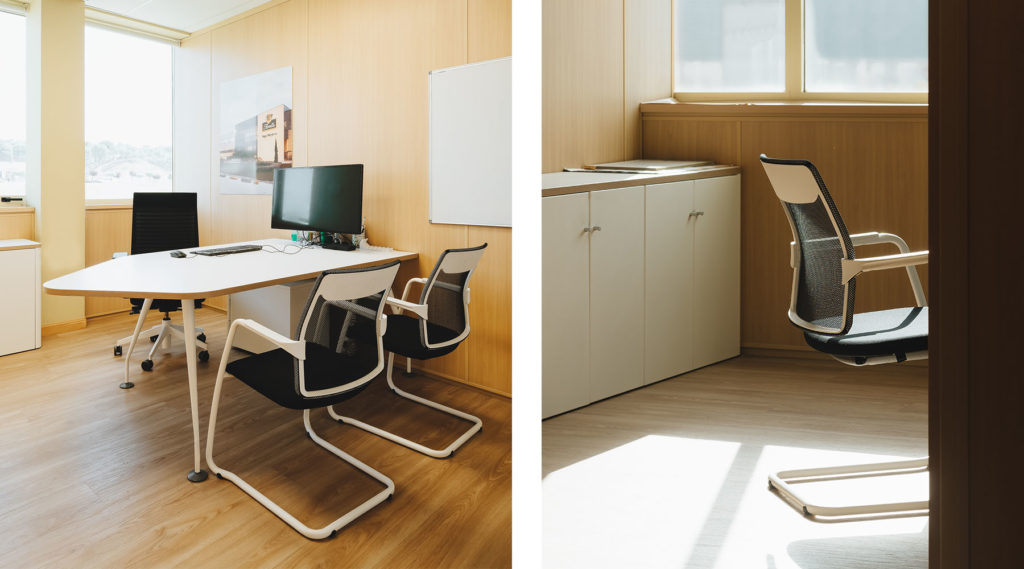 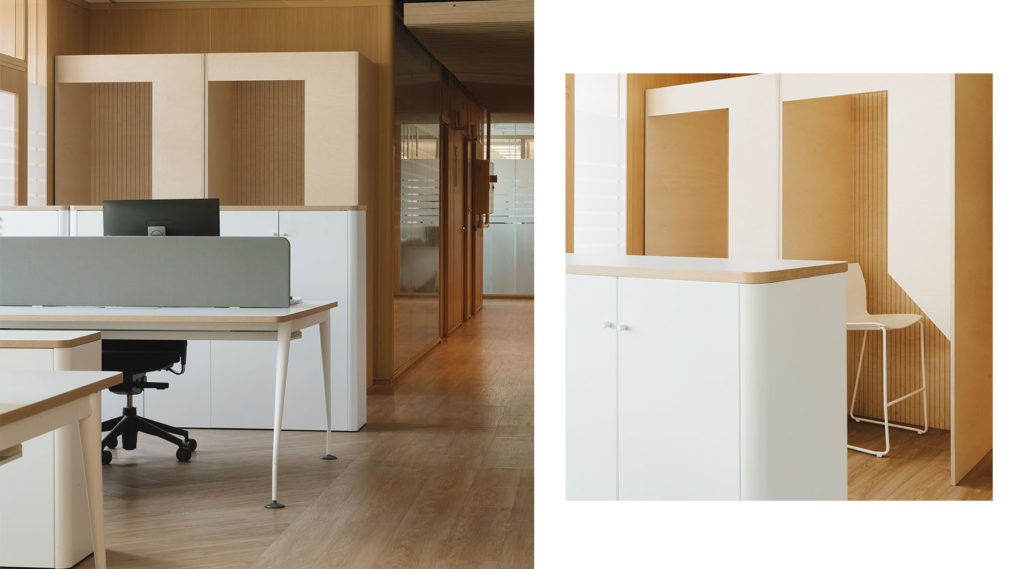 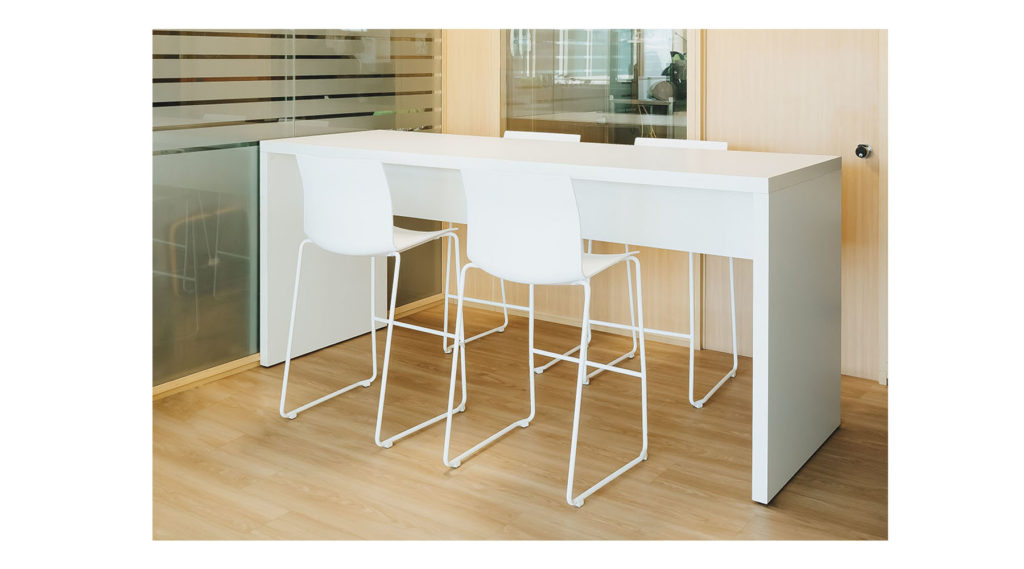 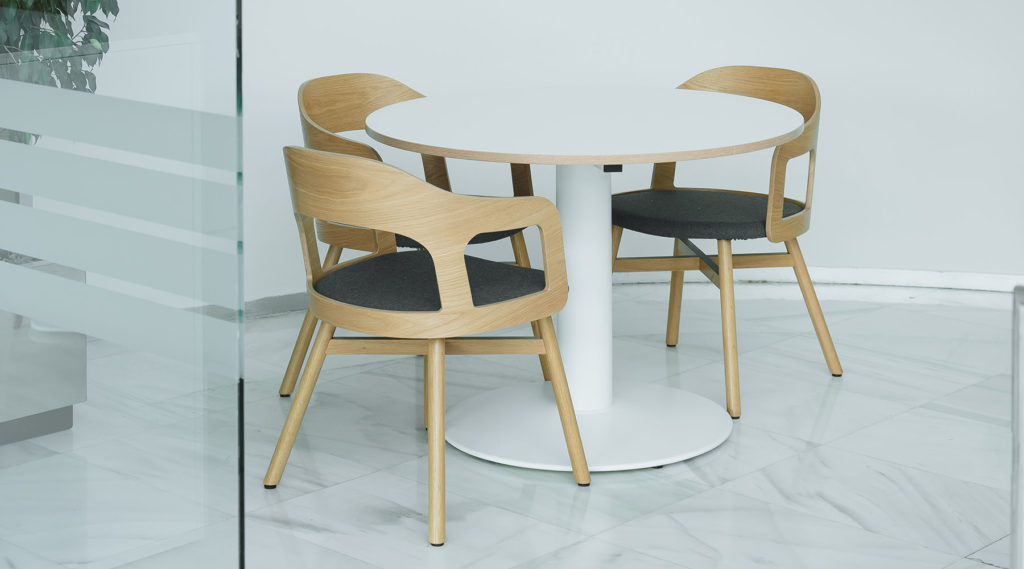 Florette is a leading European brand in fresh ready-to-eat salads and vegetables. It has 6 plants in Spain which employ around 1,800 workers. The ‘This is my home’ project, an initiative which seeks to enhance the well-being and comfort of the firm’s employees within the organisation, has been implemented at its headquarters in Milagro. With the aim of addressing a series of issues with the previous offices, Dynamobel offered its advice and project development service to solve problems such as accessibility for communication between colleagues and departments, making room for a greater number of employees in the same space and providing new spaces for more agile meetings. A crosscutting change in its office model in line with its corporate culture and operational needs was called for.

The work areas were fitted with both of the arrangement options in the Cell programme: rectangular bench and polygonal. Depending on the type of work to be performed and the need for team interaction, different table configurations were designed to encourage talent and promote exchange between people. It is also important to note that the Cell table and the Slat chair have the Cradle2Cradle certification (Cell and Slat), a globally recognised measure of safer, more sustainable products made for the circular economy. The castored drawer units are fitted with a cushion on top to serve as temporary seating for quick meetings. The benches have ample storage space thanks to the Cell cabinets located on their sides. Dynamobel managed to integrate employees into open areas in an ergonomic and functional manner. It helped transform the workspace, maintaining a balance between teamwork and the comfort of the spaces for each user.

‘The project was especially complicated because Florette didn’t stop working in the offices at any time. When the employees left on Friday, Dynamobel organised work by work station areas without affecting the users in such a way that when they came back on Monday, their new work stations were ready to use!’  Daniel Ramos. Head of Organisation and People at Florette

The work tables have sound-absorbing panels that take care of the acoustics and reverberation of the noise usually found in office areas. Even greater care was taken in this regard in the Call centre, where higher panels were installed to create individual work stations so the operators would not disturb each other.

One of the main operational advantages in the day-to-day life of Florette workers is the notable improvement in efficiency when it comes to booking rooms for meetings with managers. Dynamobel proposed desks for the individual offices with chamfered corners at one end so that the attendees could naturally gather around and participate in meetings there. The rectangular desks previously used in the conceptually traditional offices were replaced by Cell executive desks with the capacity to accommodate up to five colleagues. This resource has served to solve the bottleneck that the company was suffering due to the lack of meeting spaces and how intensely they were using them. The desks have a built-in screen mount which can be rotated so that everyone attending meetings can see.

It is also worth highlighting the quick-meeting solution achieved with the VIVA Alcoba units installed in the office. Thanks to the partitions, an environment of greater visual and acoustic privacy is created in this area, and the seats which envelope the users offer them a cosier, more relaxed experience. These meeting areas also facilitate connectivity through their connections built into the table and the screen for presentations, video calls, etc.

Finally, Florette is also pleased with the solution provided by the booths Dynamobel installed, a novel feature in the transformation of their offices which allows employees to isolate themselves from the rest of their colleagues to make calls which require greater privacy or to work independently thanks to the stool and 105-high tabletop fitted inside.

Check out the following videos (external link to Youtube) where we interviewed Daniel Ramos, Head of Organisation and People at Florette, talking about the project carried out: 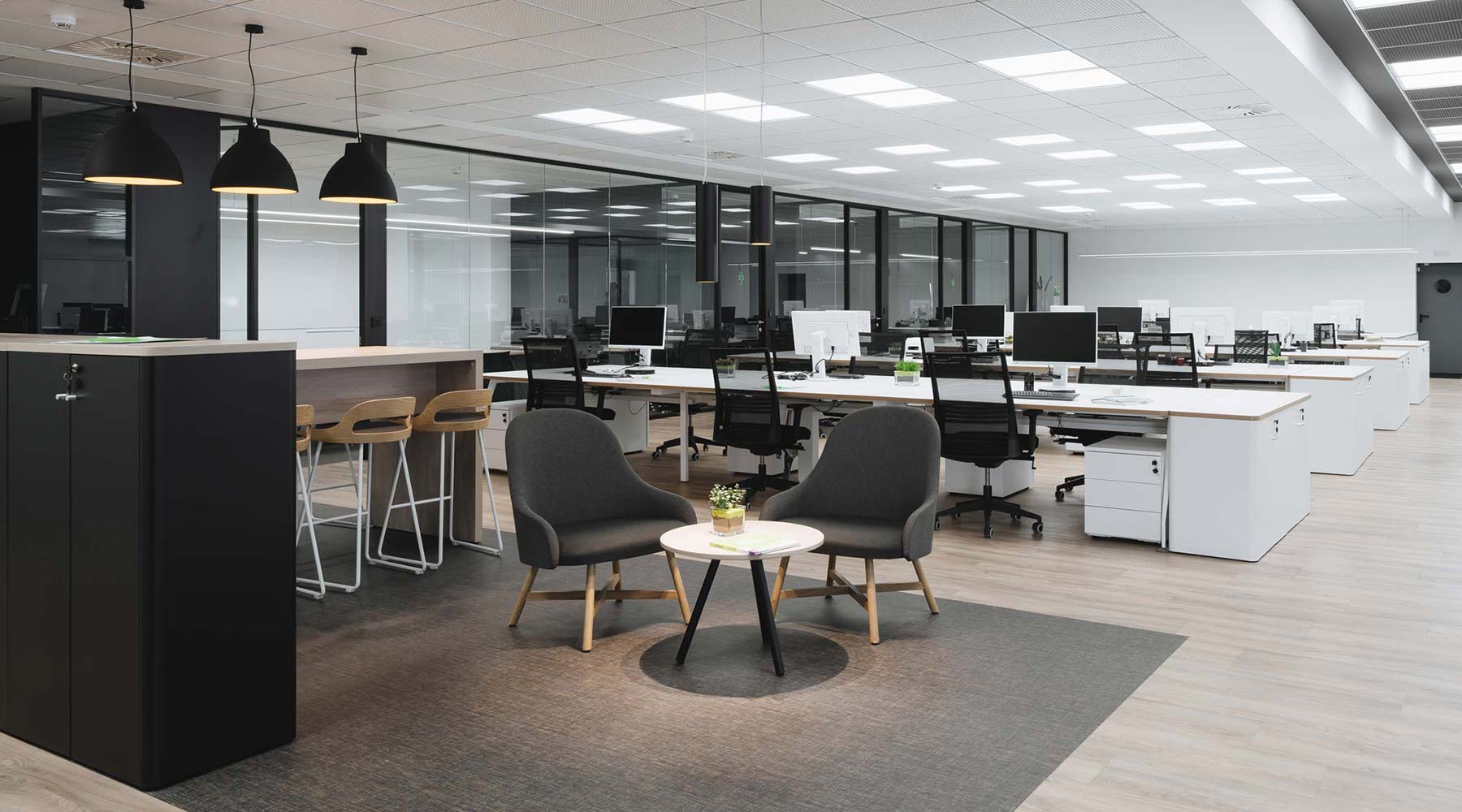